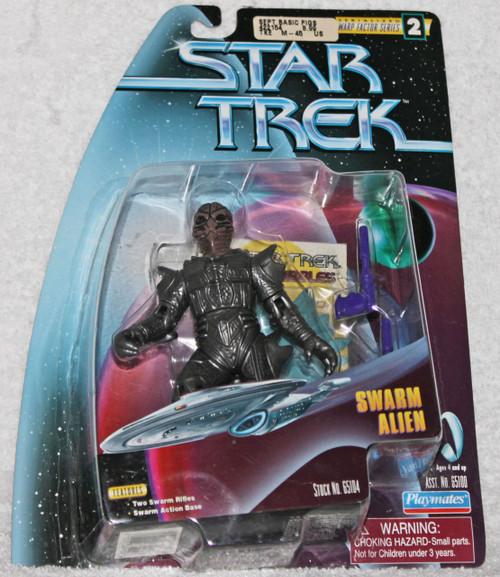 This is a vintage 1997 Star Trek action figure from Playmates. It is from Warp Factor Series 2, and is NOS: New in unopened packaging. Card shows some minor shelf wear, but is in excellent condition. Makes a great gift for any Star Trek or action figure collector!

Stardate 50252.3. Lt. Tom Paris and Chief Engineer B’Elanna Torres were in a shuttlecraft tracking intermittent sensor readings when two aliens beamed aboard their vessel and stunned them with a neuro-paralysis weapon. Neelix warned Captain Janeway that these aliens were reputed to be extremely dangerous and protective of their territory. Unwilling to take 15 months going around the aliens’ space, Janeway chose a narrow passage to cross at high warp. The Voyager came upon a damaged ship that had been attacked. One small alien craft attached to it scanned Voyager. Thousands of similar ships pursued Voyager in a swarm formation and attached to the starship’s hull, extracting energy. Several Swarm aliens tried to board Voyager but were repelled in hand-to-hand combat. Realizing that the Swarm ships were linked in a lattice, Janeway ordered the phaser frequency be modulated to attack one ship which would feedback through the entire Swarm.